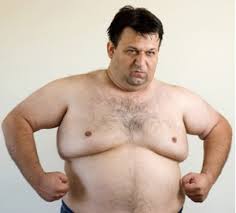 I used to contemplate about committing suicide whenever I used to see my reflection in the mirror. My friends laughed at me during the rare occasions when I used to meet them. I was unable to lead a normal social life due to lack self confidence.

To sum it up, I was an 18 years’ tall, and healthy male with a perfect body mass index, yet lacked the courage to request a girl to go on a date, because I was suffering from gynaecomastia. This is the exact term I used to tell others while chatting with them on social networks, hoping that they would not realize that it is the medical term of man boobs.

The causes of man boobs

Like many others, I searched the net for man boob problems and its causes. I was surprised to find that many factors including obesity, chronic liver disease, thyroid problems, and hormone changes during puberty are the primary causes of gynaecomastia. However, I was not suffering from those problems. I struck gold on researching further. I used to exercise a lot, and used to purchase drugs from online stores to boost my body building process.

My life has changed for the better

Thankfully, I have managed to get rid of my abnormally large breasts and now lead a normal life. I know there are many other males who suffer from this problem and want to help them. I will discuss briefly about this problem, its causes, and the exercises I performed to eliminate it. 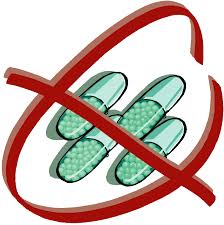 I had no idea that body building drugs and supplements contained anabolic steroids, whose excessive levels of testosterone, which, on converting to oestrogen, causes breast growth. Therefore, my primary steps towards rehabilitation were to stop consuming them. I also advise others to avoid taking these performance enhancing drugs since they cause harm in the long run.

Their after effects show up after a long time and by then the user is addicted to them. I know, since I faced withdrawal symptoms like anorexia, insomnia, depression, and concentration problems when I stopped taking them. I started concentrating on body building without resorting to performance enhancing drugs and was surprised by its positive results in just a few weeks.

I am outlining my routine so that others can benefit from them: 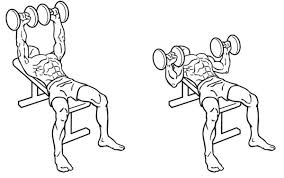 I started with the dumbbell flat press because it is easy, is the favorite of bodybuilders, and works on the triceps, shoulders, and most importantly, the chest muscles, where the man boobs are located. Its range of motions did not restrict me since I did not have lower back, shoulder, or elbow problems.

I opted for the flat bench option instead of the incline and decline versions. I grasped the dumbbells on each hand and lifted them to my knee level, leaned back on the bench, ensured that my feet were flat on the floor. I then lifted the weights over my chest, first up to my shoulders and then at arm’s length over my chest and away from my body so as to form a `V.’

I finally lowered the dumbbells until my elbows were slightly below my shoulders. I repeated this process a couple of times on the first day, and increased the count gradually. 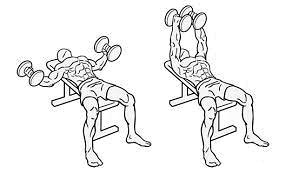 This is relatively simple and the basics are the same as that of the dumbbell flat press. The main difference is that I had to use an inward movement while lifting the dumbbells to bring them together directly above my chest (sorry, I want to avoid terming that part of my body as my man boobs). While lowering the weight, I ensured that there was an angle of more than 90 degrees between my forearms and upper arms. I repeated this procedure for three times on the first day, and gradually increased it to 15. I advise keeping the dumbbells parallel with the bench while performing this exercise. 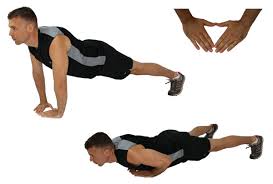 This exercise is perfect for my chest muscles… especially the pectoralis major and pectoralis minor… and is better than boring traditional pushups. I lied down on my knees, stretched forward, placed my hands underneath my breastbone, ensuring that my elbows pointed back towards my knees, and that my thumbs were at ninety degrees from my forefinger. Keeping my torso straight, I lowered by body towards the ground, bending my elbow during the process. I next pushed myself up, until my arms were straight. As with the other exercises, I increased the push up count gradually. 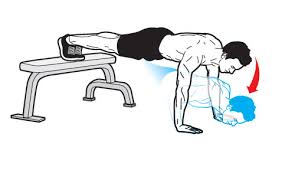 Decline push ups does not mean that I will not do push ups any more. It is the name of an exercise, and is excellent for toning chest muscles, particularly the pectoralis major. I need something to elevate the lower part of my body. A bench is perfect. I suggest starting with a bench of lower elevation and go for one with a higher elevation after a week. The exercise gets tougher on increasing the height of the bench.

This exercise is similar to the basic push up, the only difference is that the feet are placed higher than the hands. I lied down on the floor, belly downwards, and lifted my feet on the bench, toes downward and heels upwards. Placing my palms flat on the floor, I raised my body, using the force of my arms and shoulders until my body was parallel with the ground, and arms fully extended. I next relaxed my arms, allowing it to lower my body back to the initial position. I repeated this procedure a couple of times on the first day and increased the number of push ups each day.

My friends envy me

Now that I have eliminated my man boob problem, I have regained my faith and my friends no longer laugh at me. In fact, they envy me because I have befriended the prettiest girl in my locality, something I could never imagine in the past. Obviously, I have burned all my old photographs. I am sure that others, suffering from the man boob problem will find solace by practicing what I did, and regain their manly chest.