Home  »  Supplements   »   Fire Up With TestoFuel – The Ultimate Testosterone Booster! 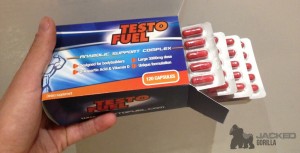 For obvious reasons, there comes a time in every man’s life when his declining production of testosterone becomes an issue that he needs to face up to. Given the choice of fighting hard against this change or fading off into the sunset, most guys will do what it takes to reclaim their prowess.

Among the many products on the market, TestoFuel takes an approach that is significantly different from the other boosters available. As its name clearly indicates, a TestoFuel review shows that this is a product which encourages the production of testosterone rather than being an additional raw dosage itself.

TestoFuel offers significant quantities of D-Aspartic Acid, or DAA, as the baseline ingredient. DAA stimulates the secretion of growth hormones in the brain. These signals trigger impulses in the glands and organs of the body, resulting in an increased output of testosterone production. While human trials have not yet fully confirmed this connection between DAA and testosterone, there is a strong indication of a connection in the research done prior to the implementation of human trials.

A stronger and in fact direct research confirmation on T-levels has already been shown to exist in the case of Vitamin D deficiencies. These deficiencies are more common as people age. Boosting Vitamin D levels is good not only for enhanced testosterone production but for many other health benefits as well.

Another portion of the TestoFuel equation comes from oyster extract, which is used as an all natural source of zinc. This mineral is a critical booster for general health as well as testosterone production. Boosting zinc levels is a proven way to obtain greater vitality on all fronts.

Including ginseng into any health product is practically obligatory due to its many well-documented properties. As a general health toning product, ginseng can hardly be beaten by anything, but it has also been clinically proven to increase testosterone.

While many supplements use Fenugreek extract as the primary ingredient, TestoFuel has elected to include it in the mix but with less emphasis. This is because the boosting properties of Fenugreek are, as yet, largely indicative rather than definitive so far as human testing has shown to date. Fenugreek certainly assists in creating the general environment necessary for enhanced production even if it is yet to be tagged as an actual booster itself. TestoFuel also adds several additional agents, including magnesium and Vitamin B6.

Looking at a list of favorable and unfavorable factors, TestoFuel seems to offer the following benefits:

On the other side of the ledger:

TestoFuel operates by stimulating natural body functions, which takes longer to produce an effect than direct testosterone supplementation.
Although much cheaper than prescription products, TestoFuel does cost somewhat more than might be anticipated.

Taken as a whole, the combination appears to provide many health benefits quite apart from its intended function as a testosterone booster and its all-natural composition is a further plus factor operating in its favor.