Home  »  Motivation   »   The Life of The Oldest Female Bodybuilder

Ernestine Shepherd is a 77-year old female bodybuilder. She’s probably the oldest female bodybuilder in the world but she looks at least 20 years younger than she really is. To keep her looks and health she starts her day every morning at 2:30 o’clock. 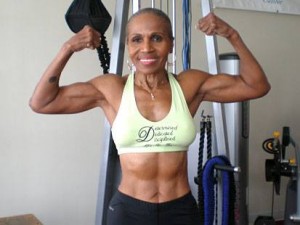 The American Ernestine began with bodybuilding training when she was 56. She started out training with her sister because she was lazy and struggled with health ailments at that time.

Her sister died in 1992 and Ernestine had a mental blow. She stopped training and fell into her old unhealthy habits.

“I suffered from high blood pressure, panic attacks and high cholesterol. Thanks to the support of my family, I became motivated to start walking again. And that has helped me achieve a healthy body without medication”.

In March 2010, Ernestine was crowned as the oldest female bodybuilder in the world. Now she sets her alarm clock every day at 2:30 am to prepare her breakfast. She starts her day with 10 scrambled eggs whites, walnuts and lots of water. An hour later, she puts her head lamp on to join her 83 year old husband for a 16 mile walk.

At eight o’clock she goes to the gym for a 2 hour workout. In the course of the day, this bodybuilder only eats chicken, vegetables and legumes. The muscular elderly woman works as a personal trainer at her local gym and inspires others to stay fit. “When I started teaching, I had ten “students”. Now our gym space isn’t big enough to get all my students in the same room”.

Finally Ernestine shares her motto to inspire other seniors to stay fit: “Age is just a number”.
You can even follow Ernestine Shepherd on Facebook.