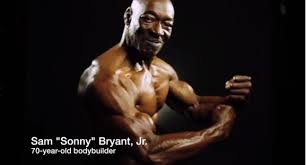 70-year old Sam ‘Sonny’ Bryant has been lifting weights for 27 years. He started at age 44. Quite late, but the bodybuilding bug caught him and never let him go. Sonny doesn’t want to stop.

“Many young people go home, sit around whole day, watch TV and do nothing“

he says to the Daily Mail.

“I’ve seen a lot of younger guys who look older than me. I can’t do what they do. I simply hate it. I need to stay busy“.

He still benches 425 pounds and exercises twice a day. Age is just a state of mind for Sam Bryant. So how about retirement?

“Never! Retirement kills more people than hard work ever did. I love to work and train. I’ve been doing this for 27 years“.

Sonny started out in the 80’s in order to process his divorce from his second wife. Barely eleven months later he took part in his first bodybuilding competition and immediately landed third place as a newbie. The amount of trophies he has won can’t even be counted anymore.

“I was like a crack addict – I was lost“

The 70-year old bodybuilder still has a job too. He even turns night shifts as a forklift operator. He stops working at 6 o’clock in the morning, eats his bacon – with – egg breakfast and goes straight to the gym.

“I want to show people that this is possible. Anyone can do this“

“People have the misconception that age makes you old, but I realize that it’s a state of mind that makes you old. Age is just a number, and it gives most people – the majority of people – a reason to be lazy and not do anything. I hear a lot of people telling me, ‘Oh, wait till I get their age.’ Then I tell them how old I am and it kind of embarrasses them. But I tell them that to make a point. That the inactivity and the thought process is what makes them old … I really, honestly, I’ve never felt like I aged since I started bodybuilding at 44. I don’t feel no different. – Sam Bryant Jr. “Sonny The 70 Year Old Bodybuilder”“