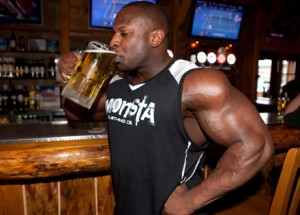 When I first started working out, I never concerned myself with questions like does alcohol affect bodybuilding. At the time, alcohol and bodybuilding side effects were not widely discussed, so I did not consider this to be particularly important.

As a young man, I did drink quite regularly. Although I did get some positive benefits from alcohol, I would say that the majority of its’ effects were negative. In fact, lots of social problems have been attributed to alcohol, such as family breakdowns and domestic violence. The irony is that alcohol is made using fairly harmless ingredients.

For centuries, alcohol has been produced using honey, fermented grains and fruit juice, and consumed by people of all nationalities. Personally, I found that alcohol helped me to relax and enjoy myself.

I always felt much less inhibited after a few drinks, and found it easier to talk to people. Some health benefits, like blood thinning (which can help cardiovascular functioning), have also been reported.

Nonetheless, the problem I often faced is that I didn’t know when to stop. It is not healthy to consume any more than a couple of alcoholic drinks, in the majority of cases. Because I regularly consumed more than this, the aforementioned benefits were outweighed by the negative effects.

One reason for this is that alcohol is categorized as a depressant of the central nervous system. Therefore, it relaxes the brain and reduces inhibitions.

Alcohol adversely affected my muscle coordination, speech, logical reasoning and emotional well being. This is when I discovered that alcohol and muscle building are not a good combination. In severe instances, the consequences can be fatal.

For bodybuilders in particular, alcohol is highly detrimental. Some fitness enthusiasts have asked me does alcohol affect abs. My answer is always a resounding ‘yes’, because alcohol interferes with:

I never fail to wince, whenever I recall the amount of money I wasted on damaging my health and hindering my progress as an athlete.

How Much Does Alcohol Really Hurt Your Gains?

For all types of athletes, alcohol is especially harmful. It obstructs many processes that are crucial for success, such as focus and recovery.

Ultimately, when I drank too much, it affected my performance in the gym. I felt physically weaker and more drained after workouts. Protein metabolism is impacted negatively, once alcohol enters the system. Clearly, this can hinder the process of muscle repair and thus affect muscle growth.

Professional sports men and women should not drink during competitions, because the effects of alcohol can last for days.

While alcohol is quickly absorbed, it is gradually metabolized, so its’ effects might still impede athletic performance for as long as two days after the previous drink.

I found that if I tried to train within two days of a heavy drinking session, I experienced a reduction in physical strength, slower reaction times, fatigue and worse balance and hand/eye coordination.

Liver function is substantially affected after alcohol is consumed. I discovered later that I felt tired because my liver was still metabolizing the alcohol, while sacrificing glycogen (metabolized carbohydrate). Glycogen is required for the body’s cells to function correctly. Therefore, these health problems arise when it is not used efficiently.

I also found that drinking gave me the sweats and caused me to dehydrate. This is because alcohol impacts kidney function, and disrupts the regulation of fluids and electrolytes in the body. Nutrient supply and cellular waste removal are the primary functions of electrolytes and fluid, which are controlled via kidney function.

Large quantities of water are filtered by the kidneys from many areas of the body, like the brain, to metabolize alcohol. Due to the dehydration I experienced, I had to tone down the intensity of my workouts. 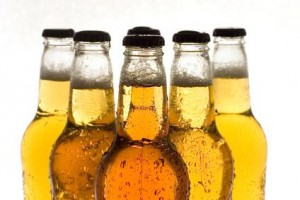 As well as reducing my explosive physical strength, drinking also depleted my stamina and aerobic capabilities for a couple of days after a night out. Alcohol intake boosts blood pressure, which means that the heart has to work harder to direct blood throughout the body.

I frequently suffered from insomnia, following a boozing session. Although I would fall asleep reasonably early, I usually woke up during the night and found it hard to get back to sleep. Needless to say, proper sleep is vital for all athletes. There’s nothing worse than trying to train when you feel like a zombie.

Certainly, sleep disruption linked to alcohol results in the inadequate restoration of neural processes. Disorientated thinking can be caused, if the brain receives insufficient glycogen due to alcohol metabolism. The ramifications of cognitive malfunction are serious for athletes. It made me feel less motivated and focused.

Alcohol can hinder the absorption of minerals and vitamins, which are crucial for good health. Also, it gradually depletes the body’s own vitamin supplies. Sometimes, even just a couple of drinks each day (apparently a ‘safe’ amount) has this effect. In particular, B vitamins are depleted extremely quickly. These vitamins have crucial metabolic and enzymatic functions.

Consequently, the kidneys, thyroid, heart and liver are damaged.

Vitamin A is depleted as well, and this makes the body more susceptible to illnesses. The depletion of Vitamin C makes the body vulnerable to anemia. Furthermore, when alcohol is consumed, calcium is excreted from the body at double the normal rate, thereby impeding wound healing and bone growth.

While alcohol significantly affected my performance for one or two days after a drinking session, it was the indirect, long term effects that caused me the most harm. Once the quality of my sleep and training declined, my performance was noticeably affected. It was only when I made a conscious effort to stay sober, that I realized how much it was hindering me.

Therefore, I recommend all serious athletes to avoid alcohol entirely, when competing and weight training. Learn from my mistakes and don’t risk damaging your health, and putting yourself at a disadvantage, just for the sake of some short term pleasure.

So does alcohol affect muscle growth? Yes it does! Alcohol and bodybuilding, they just don’t mix!